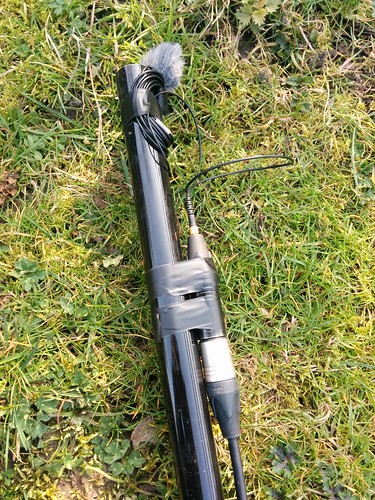 Most of my birdsong recordings are made with a parabolic reflector. This is an excellent way of capturing sound from sources that are too far away to record without disturbing them. I much prefer the sound of an open microphone however. Angling a reflector to find the sweet spot of a singing bird is challenging enough. But there's something far more satisfying observing a bird or animal, noting its favoured song posts and placing a microphone as close as possible. Close recordings usually feature minimal intrusion from background noise and it's a good way to isolate individual birdsong. With a reflector you can loose some of the lower end frequencies but not with an open mic right in front of the subject.

But what if the subject is high up in a tree? A parabolic reflector is definitely the easiest solution, but I've been trying to find ways to position a microphone as close to the subject as possible. Last year a blackcap had been frequenting the top of a tall plum tree. How could I place the microphone all the way up there? One solution was to launch a projectile attached to a long piece of string over a branch, tie the microphone to the string and hoist it up. This didn't really work out, partly because my throwing accuracy was often sub par but also the cable of the microphone was damaged during hoisting. Plus this would be ill advised in populated areas....I tried attaching the string to an arrow and launching it with a bow but this also proved unsuccessful, as fun as it was.

What I needed was something like a boom pole. It was suggested I tried a window cleaning pole but this unfortunately was too flexible and wouldn't support the weight of the microphone. I've seen fishermen using long extendable poles for fishing but these were too expensive. A telescopic flag pole, however would be just right! 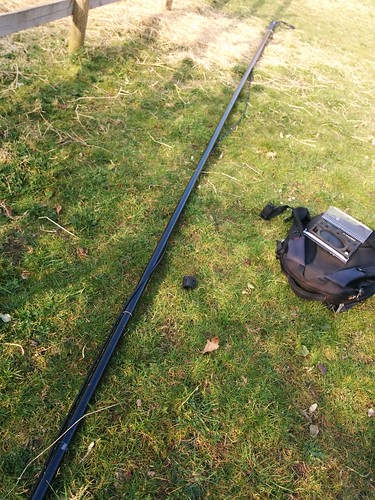 I sourced a 10 meter telescopic flag pole from eBay for about £25. It was lightweight, could be packed down to a carry-able size and sturdy enough to support the weight of a microphone without flexing.

The other day I had the opportunity to try it out during a trip back home in Kent. My parents had spotted a blackbird with unusual song elements frequenting a particular stretch of telegraph pole every evening. I placed the pole where they said the blackbird usually sits with a single DPA4060 attached. I ran 60 feet of cable back to the house and set my recorder rolling. An hour or so later I had captured a robin singing at exactly the right spot.

I would have loved to position the microphone even closer, it was about 5 feet away from the bird. However, I couldn't risk the pole touching the wire for fear of electric shock. Fortunately robins are rather loud so I captured a fairly decent recording. Blackbirds on the other hand have softer voices. When the bird did finally show up, he sat far too far away from my microphone! After some time singing away, he moved closer for about 20 minutes and was joined by the robin at times.

If the microphone had been closer I wouldn't have picked up half as much rush hour traffic (even in a village its quite noticeable) as I wouldn't have needed as much gain going into the microphone to pick up the blackbird's song. It's all about the signal to noise ratio in this game. Nevertheless I'm pleased with the robin recording. I have a feeling the flag pole is going to be a vital piece of kit!

Here's the full 20 minute recording of the blackbird. Not the best recording but some of the unusual elements of his song are a delight to hear!